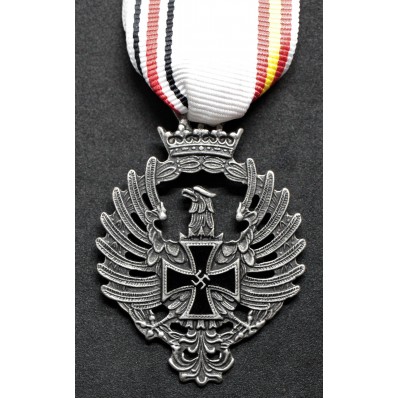 The Blue Division (Spanish: División Azul, German: Blaue Division), officially designated as División Española de Voluntarios by the Spanish Army and 250. Infanterie-Division in the German Army was a unit of Spanish volunteers and conscripts that served in the German Army on the Eastern Front of the Second World War.

Although Spanish dictator Francisco Franco did not officially bring Spain into World War II on the side of Nazi Germany, he permitted volunteers to join the German Army (Wehrmacht) on the condition they would only fight against the Soviet Union on the Eastern Front, and not against the Western Allies or any Western European occupied populations. In this manner, he could keep Spain at peace with the Western Allies, while repaying German support during the Spanish Civil War and providing an outlet for the strong anti-Communist sentiments of many Spanish nationalists. Spanish foreign minister Ramón Serrano Súñer suggested raising a volunteer corps, and at the commencement of Operation Barbarossa, Franco sent an official offer of help to Berlin.

Soldiers of the Blue Division in a trench at the Eastern Front.
Hitler approved the use of Spanish volunteers on June 24, 1941. Volunteers flocked to recruiting offices in all the metropolitan areas of Spain. Cadets from the officer training school in Zaragoza volunteered in particularly large numbers and were given leave by the Spanish army. Initially, the Spanish government was prepared to send about 4,000 men, but soon realized that there were more than enough volunteers to fill an entire division: 18,104 men in all, with 2,612 officers and 15,492 soldiers.

Fifty percent of officers and NCOs were professional soldiers given leave from the Spanish army, including many veterans of the Spanish Civil War. Many others were members of the Falange (the Spanish Fascist party). Others felt pressure to join because of past ties with the Republic or like Luis García Berlanga, who later became a well-known cinema director to save relatives in Franco's prisons from execution. The division also included a number of Portuguese volunteers.

General Agustín Muñoz Grandes was assigned to lead the volunteers. Because the soldiers could not use official Spanish army uniforms, they adopted a symbolic uniform comprising the red berets of the Carlists, the khaki trousers of the Spanish Legion, and the blue shirts of the Falangists hence the nickname "Blue Division". This uniform was used only while on leave in Spain; in the field, soldiers wore the German Army (Wehrmacht Heer) field grey uniform with a shield on the upper right sleeve bearing the word "España" and the Spanish national colours.