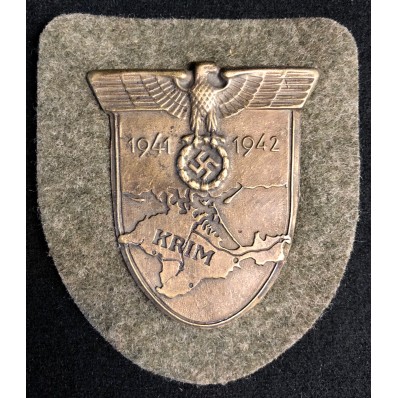 The Crimea Shield (German: Krimschild) was a World War II German military decoration awarded to military personnel under the command of Generalfeldmarschall Erich von Mansteinwho fought against Soviet Red Army forces and captured the Crimea region (Krim in German) between 21 September 1941 and 4 July 1942.

The Wehrmacht's Army Group South advanced through the Crimean peninsula between the Autumn of 1941 and Summer of 1942. To commemorate the hostilities that ended with the German capture of Sevastopol on 4 July 1942 the Crimea Shield was created for all members of the armed forces under area commander Field Marshal Erich von Manstein.

The shield is headed by the German eagle clutching a laurel wreath surrounding a swastika. Flanking the eagle are the dates 1941 and 1942, which represent the start and end dates of the campaign. This sits on the backdrop of the Crimean peninsula, where the fighting took place, which has the word KRIM stamped across it.

The Crimea Shield could be awarded to all members of the Wehrmacht and to Luftwaffe and other units affiliated to the campaign between 21 September 1941 and 4 July 1942. The following conditions needed to have been met for the award:

Romanian troops serving in the Crimea were also eligible for the award.

A special pure-gold version of the Crimea Shield was also produced. It was first bestowed upon Marshal Ion Antonescu, the military dictator of Romania, at the end of the Siege of Sevastopol (3 July 1942). It was awarded to him in Bucharest by Erich von Manstein, on Adolf Hitler's behalf. The second and last Golden Krimschild was awarded to von Manstein himself, on 24 November 1942.