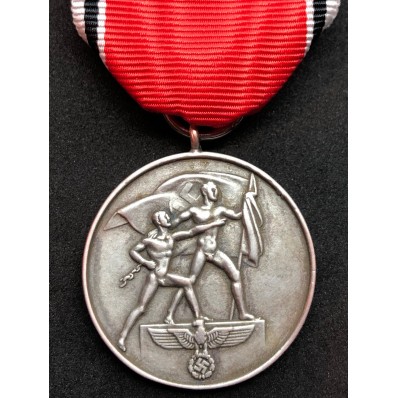 The Anschluss Commemorative Medal (German: Die Medaille zur Erinnerung an den 13. März 1938) was a decoration of Nazi Germany awarded in the interwar period.

Instituted on 1 May 1938, the medal commemorated the annexation of Austria to the German Reich, the so-called Anschluss. The move was the first in Hitler's quest for Lebensraum, and it strengthened German flanks while weakening those of Czechoslovakia. German troops crossed the border on 12 March 1938, without meeting any resistance. The stage had been set by a series of "incidents" provoked by members of the Nazi Party in Austria, and diplomatic pressure and ultimatums set forth by the German government. This first action, while perhaps raising suspicions, did not cause general alarm in the world community, as it seemed to be done by choice of the Austrian people who spoke German.

The medal, known as the "Anschluss medal", was awarded to all those Austrians who contributed to or participated in the annexation as well as the members of the Austrian National Socialism movement. It was also awarded to German State officials and members of the German Wehrmacht and SS who marched into Austria.

Officers Badge for Observation from Airplane