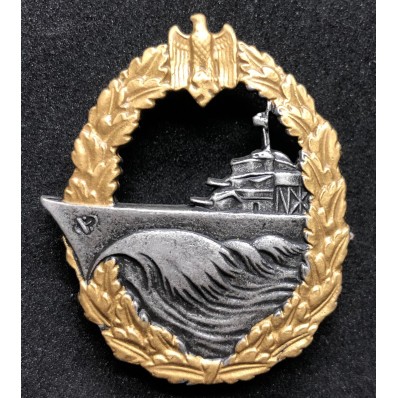 The Zerstörer-Kriegsabzeichen (Destroyer War Badge) was instituted on 4 June 1940 by the Commander in Chief of the Kriegsmarine (German Navy) Grossadmiral (Grand Admiral) Erich Raeder to award destroyercrews for their participation in the Norwegian campaign, especially the Battle of Narvik.

This product is no longer in stock

The award was designed by Paul Carsberg of Berlin. It was initially made of bronze and later in the war of zinc. The award consists of an gold oak leaf wreath, with in its center, coming from the right towards the left a broadside view of a destroyer. The superstructure of the destroyer joins the right inner edge of the wreath and the bow cuts through the left side. Beneath the bow is a large bow wave, meaning that the ship is steaming at high speed. The destroyer design features the Z21 Wilhelm Heidkamp, a 1936-class destroyer commanded by Knight Cross holder Korvetten-Kapitän Hans Erdmenger. This ship was sunk at Narvik. The ship and the sea are dark silver and the colour of the wreath with the eagle is gold. The top of the wreath shows a small eagle with folded wings and clutching a small swastika in its claws. At the bottom are two horizontal oak leafs, joined together by a knotted ribbon. At the upper side of those two leaves is the top of a single leaf and from this point on each side, six bunches of two oak leaves irregularly positioned, with at the top of these a single leaf touching the outer edge of the eagle’s wing. The height of the award from bottom to the top of the eagle’s head measures 54 mm. The width from the tip of the bow is 45 mm and the wreath is 7 mm wide. The reverse is plain and slightly concave and can have a variety of hinges and hooks. The most common form is a horizontal pin in the form of an elongated triangle at the back of the destroyer, above this pin a small hook mounted behind the eagle. Some known manufacturers: Schwerin from Berlijn, (mint mark SCHWERIN BERLIN 68) Friedrich Orth from Vienna, (f.o.) Rudolf Souval from Vienna, (R.S.) Gebrüder Wegerhoff from Lüdenscheid, (G.W.L.) Steinhauer & Luck from Lüdenscheid, (4) Josef Feix & Sohn from Gablonz ad N., (JFS) Sohni Heubach & Co from Oberstein, (S.H.u.Co.) B.H. Mayer from Pforzheim, (L/18) Foerster & Barth from Forzheim, (L/21) and Funcke & Brüninghaus from Lüdenscheid. (L/56) There’s also a second version of the award, made by Mourgeon from Paris. This one is identical to the former award.

The Destroyer War Badge was originally instituted to award those crews who had fought under the command of Commander Bonte in the Battle of Narvik. It was awarded in conjunction with the Narvik Shield, although the Narvik Shield is a separated award. From 22 October 1940 onwards, the award could also be presented to other crew members of Destroyers, Torpedo-boats and E-boats, until a separate award was instituted on 30 May 1941 for the latter two. The requirements for receiving the award were:

These criteria did not count for the crews who participated in the Battle of Narvik.

20 other products in the same category:

War Badge of the Coastal Artillery "S.H. u Co."