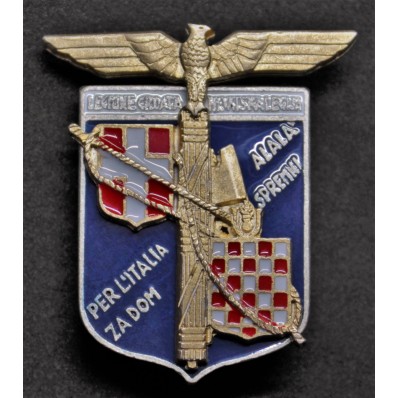 Badge of the Croatian Legion

The Croatian Legion was a foreign unit of the Italian Royal Army, created in 1941 and placed first in the Italian Expeditionary Corps in Russia and then in the 8th Army.
The unit was called Lako prevozni zdrug ("Motorized Light Brigade"), while the name Hrvatska legija ("Croatian Legion") was used to indicate the aggregated departments of the Royal Army and the Wehrmacht.

10 other products in the same category:

Croatian badge for the Beginning of the Homeland War...

Croatian badge for the Beginning of the Homeland War (Gold)

Decoration For The Campaign Of Northern Afrika