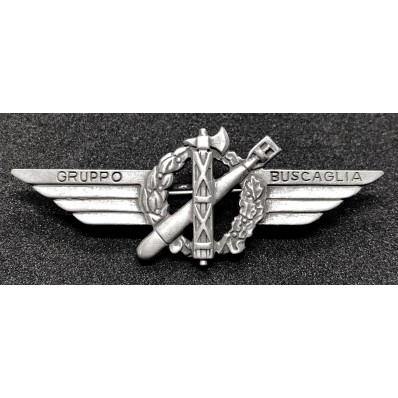 The "Buscaglia" Torpedo Bombers Group was an air unit of the RSI, born under the wing of the A.N.R., entitled to a captain of the Italian Royal Air Force believed to have disappeared following a dangerous operation on the bay of Bougie.

Carlo Emanuele Buscaglia was a captain of the Italian Royal Air Force. On 12 November 1942, taking off from Castelvetrano, while carrying out a dangerous mission on the Bougie bay, it was intercepted and shot down by some American "Spitfire" fighters of the 81st Squadron. The heroic Buscaglia was declared "lost in action" and awarded with the Gold Medal for Military Valor to the memory.

But Buscaglia survived. The Americans captured him and, after curing him, they deported him to a Maryland prison camp.

He, who had sworn allegiance to the monarchy, asked to be able to fight alongside the new allies (the Americans), since in the meantime Italy had split in two. The Americans, therefore, responded affirmatively to Buscaglia's question and, knowing his excellent military skills, brought him back to Italy and enlisted him in the ambit of the Italian Allied Air Force.

Meanwhile, his former fellow soldiers of the 132nd Torpedo Bombers Group made the opposite choice: they enlisted in the Republican National Air Force and, paradoxically, entitled to him (who they believed to be dead) the Torpedo Bombers Group "Buscaglia", established in Gorizia on October 14, 1943 .

Meanwhile, on 15 July 1944, Buscaglia took command of the 28th bombing group, deployed on the Campo Vesuvio airport near Ottaviano (Naples).
On August 23, he took off alone with an aircraft supplied to his group, which he knew little about.
It was probably the scarce knowledge of the machine that determined the tragedy: the plane reared up, touched the ground with the left wing, crashed and caught fire. The pilot came out of the burning plane on his own and he was immediately rescued and hospitalized in the military hospital of Naples, dying the day after due to severe burns.

It was never known why he wanted to take off on his own: in the South they said he wanted to get used to the plane, in the North they claimed that he intended to pass the lines and rejoin the old arms of the Group that bore his name.

Commemorative Cross of the Italian Expeditionary Corps in...

Medal - Musketeers of the Duce