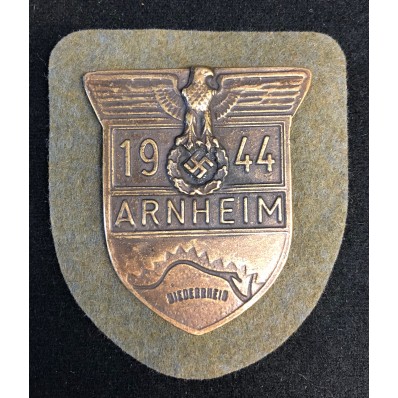 Market Garden contained the largest airborne operation up to that point.

Field Marshal Montgomery's strategic goal was to encircle the heart of German industry, the Ruhr, in a pincer movement. The northern end of the pincer would circumvent the northern end of the Siegfried Line giving easier access into Germany. The aim of Operation Market Garden was to establish the northern end of a pincer ready to project deeper into Germany. Allied forces would project north from Belgium, 60 miles (97 km) through the Netherlands, across the Rhine and consolidate north of Arnhem on the Dutch/German border ready to close the pincer.
The operation made massed use of airborne forces, whose tactical objectives were to secure the bridges and allow a rapid advance by armoured ground units to consolidate north of Arnhem. The operation required the seizure of the bridges across the Maas (Meuse River), two arms of the Rhine (the Waal and the Lower Rhine) together with crossings over several smaller canals and tributaries.
Several bridges between Eindhoven and Nijmegen were captured at the beginning of the operation. Lieutenant-General Brian Horrocks' XXX Corps ground force advance was delayed by the initial failure of the airborne units to secure bridges at Son and Nijmegen. German forces demolished the bridge over the Wilhelmina Canal at Son before it could be secured by the 101st Airborne Division. The 82nd Airborne Division's failure to capture the main road bridge over the river Waal at Nijmegen before 20 September also delayed the advance of XXX Corps.
At the furthest point of the airborne operation at Arnhem, the British 1st Airborne Division encountered initial strong resistance. The delays in capturing the bridges at Son and Nijmegen gave time for German forces, including the 9th and 10th SS panzer divisions who were present at that time, to organize and retaliate.[18] In the ensuing battle, only a small force managed to capture the north end of the Arnhem road bridge and after the ground forces failed to relieve them, the paratroopers were overrun on 21 September. The remainder of the 1st Airborne Division was trapped in a small pocket west of the bridge, having to be evacuated on the 25th of September.
The Allies had failed to cross the Rhine. The river remained a barrier to their advance into Germany until offensives at Remagen, Oppenheim, Rees and Wesel in March 1945. The failure of Market Garden to form a foothold over the Rhine ended Allied expectations of finishing the war by Christmas 1944.