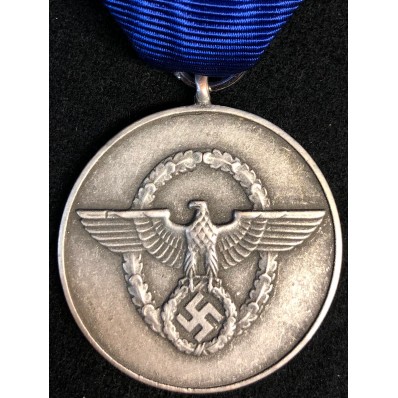 The Long Service Police Award (1938) was created to award all the police officers after an appropriate completion of the service for 8, 18 or 25 years. It was donated by decree dated 30 January 1938 by Adolf Hitler.

On 30 January 1938, Adolf Hitler ordered the institution of an award for members of the police force who met qualifications based on length of service. The award was given in three grades to men who had served for eight, eighteen, and twenty-five years. The design of all three medals had the police insignia, which consisted of a national eagle emblem surrounded by a wreath, on the obverse side. All three awards were emblazoned with the inscription Für treue Dienste in der Polizei ("For faithful service in the Police") on the reverse. On 12 August 1944, a higher grade was authorized for 40 years of service. It was to be in the form of a gold metal bar with the number 40 with oak leaves, to be affixed onto the ribbon of twenty-five years award. There is no record of it being awarded prior to the end of World War II in Europe.

To qualify for the medal, a person had to be an active member of the police or "an administrator" in the police service. Military service time could also be applied to the total time of service needed for the award.