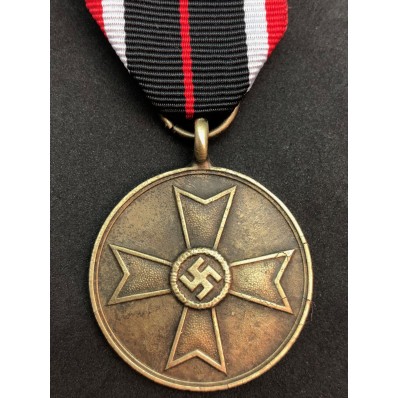 The War Merit Medal (German: Kriegsverdienstmedaille) was a World War II German military decoration awarded to recognize outstanding service by civilians in connection with the war effort. Instituted on 19 August, 1940 the medal was restricted to civilians - both German and non-German - and was awarded predominantly to those working in war factories.

The medal, designed by Professor Richard Klein of Munich, was a circular bronze award bearing the design of the War Merit Cross on the front (obverse), and the inscription For War Merit 1939 (German: Für Kriegsverdienst) on the reverse. It was suspended from a ribbon coloured similar to the War Merit Cross, except for a thin red vertical strip added to the center of the black portion. When worn, it was either as a medal ribbon bar above the left breast pocket (soldiers who had earned the medal as civilians could wear it on the uniform), or with the ribbon only through the second buttonhole of the tunic. Since this was a non-combat award, the medal never incorporated swords.
After 15 May, 1943, the award of this medal to foreigners was supplanted by the Medal of Merit of the Order of the German Eagle.
The medal was presented in an envelope wrapper. The wrapper was blue with black lettering German: Kriegs-Verdienstmedaille 1939, with the medal itself wrapped in a small piece of tissue paper. Envelopes also came in orange-brownish colour with "Kriegs-Verdienstmedaille 1939" stamped on it.
It is estimated that approximately 4.9 million medals were awarded by the end of the war.