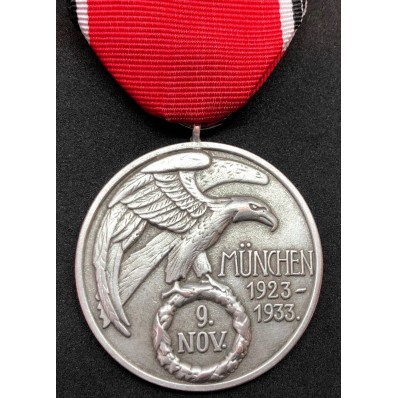 Blood Order (with Marks and Number)

The Blood Order (German: Blutorden), officially known as the Decoration in Memory (of the Munich putsch) of 9 November 1923 (German: Medaille zur Erinnerung an den 9. November 1923), was one of the most prestigious decorations in the Nazi Party.

The first issue of the decoration, struck in 99% pure silver, was awarded to 1500 participants in the putsch who had also been members of the party or one of its formations before January 1932 (continuous service), or had been cadets from the Munich Infantry School who marched in support of Ludendorff.[Note 1] All medals were numbered (except Hitler's and Göring's) and awarding was done very carefully. Unlike other medals, the ribbon was worn on the right breast of the uniform tunic in the form of a rosette and the medal sometimes was pinned on and suspended below.

In May 1938, to the dismay of the putsch participants, the award was extended to persons who had (a) served time in prison for Nazi activities before 1933, (b) received a death sentence which was later commuted to life imprisonment for Nazi activities before 1933, or (c) been severely wounded in the service of the Party before 1933; subsequently it was further extended to members of the Austrian Nazi Party who had participated in the 1934 February Uprising or July Putsch, or who had received significant prison time or injuries for National Socialist activities. It could also be bestowed on certain other individuals at the discretion of Adolf Hitler, the last recipient being Reinhard Heydrich (posthumous).[1] These subsequent medals were struck in 80% silver with serial numbers above 1500 and did not carry the maker's name (J. FUESS MÜNCHEN) as the Type I medals did.

If a holder of this medal left the party, the medal would have to be relinquished.

In total 16 women received the award, two from the 'Altreich' (Eleonore Baur and Emma Schneider) and 14 from Austria. Given the number of original marchers in the putsch, the number of awards given under the 1938 extensions (436), and the awards for outstanding service under those same extensions, the total number of recipients numbered fewer than 6,000.