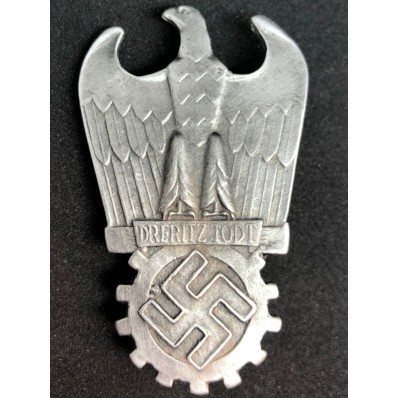 In July 1933, five months after Hitler became Reichskanzler, Todt was appointed "Inspector General for German Roadways" (Generalinspektor für das deutsche Straßenwesen). This top public authority (Oberste Reichsbehörde) was privileged to be outside the hierarchy of Reich Ministeries, and Todt was directly subordinated to Hitler. Alan S. Milward characterized this phase as follows: "His personal views on business questions and, what was more important, the success of the motorway project kept Todt in the inner circle of the Führer. At the same time, his deliberate pose as a technical expert, as a man without interest in internal power struggles, saved him from the adversaries of the more important party leaders for long time. ":44 He was tasked to organize a new construction company for the motorways (Reichsautobahnen). He edited the journal "Die Strasse", which was a publication of his agency from 1934 - 1942. For his work on the autobahnen, Todt was recognized with the German National Prize for Art and Science by Hitler, next to Ernst Heinkel, Ferdinand Porsche und Willy Messerschmitt.[1] Hitler donated the award in 1937, devised as a replacement for the Nobel Prize, which Hitler forbade Germans from accepting starting in 1936.[citation needed]

In 1938, he became Leiter des Hauptamts für Technik in der Reichsleitung der NSDAP ("Director of the Head Office for Engineering in the National Directorate of the NSDAP") and in December Generalbevollmächtigter für die Regelung der Bauwirtschaft ("General Commissioner for the Regulation of the Construction Industry") At the beginning of WWII he was also appointed to the rank of Generalmajor of the Luftwaffe.

In May 1938, he founded the Organisation Todt (OT), joining together government firms, private companies and the Reichsarbeitsdienst (Reich Labor Service). OT used up to 800,000 forced laborers (Zwangsarbeiter) from countries Germany occupied during World War II.

Todt was responsible for the construction of the "West Wall" (commonly called "Siegfried Line" in english speaking countries) to defend the Reich territory.

On 17 March 1940, Todt was appointed Reichsminister für Bewaffnung und Munition ("Minister for Armaments and Munitions") which meant he oversaw the entire military economy.

After the invasion of the Soviet Union in June 1941, Todt was appointed to manage the restoration of the infrastructure there. At the end of July 1941 he was named Inspector General for water and energy. During that year, he became increasingly distant from the commanders of the Wehrmacht and in particular, from Reichsmarschall Hermann Göring, the Oberbefehlshaber der Luftwaffe (Commander-in-chief of the Luftwaffe). While he remained close to Hitler at this time, after an inspection tour of the Eastern Front, Todt complained to him that without better equipment and supplies for the armed forces it would be better to end the war with the USSR. Hitler rejected such an assessment and carried on the offensive against the Soviets regardless.

Sale!
Quick view
Add to Wishlist
Out of stock

RAD Badge for the Labour Service Exhibition in Breslau 1934

Badge for the 1934 Football Game Between Germany and...