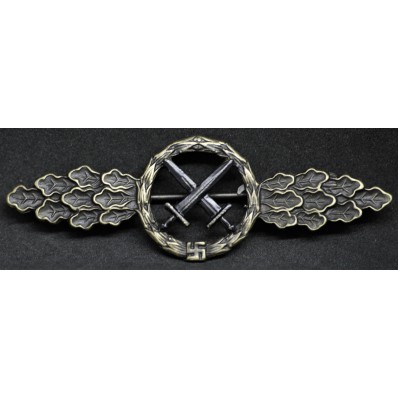 The Luftwaffe was the aerial warfare branch of the combined German Wehrmacht military forces during World War II.

During the interwar period, German pilots were trained secretly in violation of the treaty at Lipetsk Air Base. With the rise of the Nazi Party and the repudiation of the Versailles Treaty, the Luftwaffe was officially established on 26 February 1935. The Condor Legion, a Luftwaffe detachment sent to aid Nationalist forces in the Spanish Civil War, provided the force with a valuable testing ground for new doctrines and aircraft. Partially as a result of this combat experience, the Luftwaffe had become one of the most sophisticated, technologically advanced, and battle-experienced air forces in the world when World War II broke out in 1939. By the summer of 1939, the Luftwaffe had twenty-eight Geschwaders (wings).

During World War II, German pilots claimed roughly 70,000 aerial victories, while over 75,000 Luftwaffe aircraft were destroyed or significantly damaged. Of these, nearly 40,000 were lost entirely.

The Luftwaffe proved instrumental in the German victories across Poland and Western Europe in 1939 and 1940. During the Battle of Britain, however, despite inflicting severe damage to the RAF's infrastructure and, during the subsequent Blitz, devastating many British cities, the German air force failed to batter the beleaguered British into submission. From 1942, Allied bombing campaigns gradually destroyed the Luftwaffe's fighter arm. In addition to its service in the West, the Luftwaffe operated over the Soviet Union, North Africa and Southern Europe. Despite its belated use of advanced turbojet and rocket propelled aircraft for the destruction of Allied bombers, the Luftwaffe was overwhelmed by the Allies' superior numbers and improved tactics, and a lack of trained pilots and aviation fuel. In January 1945, during the closing stages of the Battle of the Bulge, the Luftwaffe made a last-ditch effort to win air superiority, and met with failure. With rapidly dwindling supplies of petroleum, oil, and lubricants after this campaign, and as part of the entire combined Wehrmacht military forces as a whole, the Luftwaffe ceased to be an effective fighting force. After the defeat of Germany, the Luftwaffe was disbanded in 1946. The Luftwaffe had only two commanders-in-chief throughout its history: Hermann Göring and later Generalfeldmarschall Robert Ritter von Greim. The Luftwaffe High Command was involved in Nazi medical experiments.

Medal for the "Anti-Guerrilla Fight"