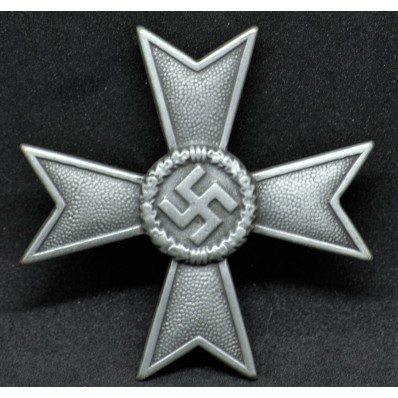 The Cross of War Merit (in German: zivilverdienstorden I. klasse) was an offense granted by Nazi Germany.

The reward was created by Adolf Hitler in 1939 as the main decoration of the merit, reserving the Iron Cross only to the actions of value. The assumption for the iron cross was in fact valuable in the face of the enemy or exceptional command merit. In the previous wars the Iron Cross was conferred both in value and merit, but in the latter case it was carried with the white instead of the black ribbon.

The war war merit was granted for war merits and had two variants: swords (given to soldiers for exceptional combat services but not directly on the front line) and no swords (given for a worthy service behind the combat lines As well as civilians). The concession condition is that for a higher degree, the giver must already have the lower grade medal. The last class, the medal, was created only in 1940 and reserved only to civilians since the creation of many Class II swords without swords had become burdensome and devaluing for the class.

A further degree was created on the suggestion of Albert Speer, the Knight's Gold Cross, which however remained only at the sketch stage and was never granted, even though he had on the card two receivers: Franz Hahne and Karl Saur.

The decoration ribbon was red-white-black-white-red where red and black were colors inherited from the previous version of the war cross while white and black were also present in the Iron Cross. The medal ribbon was similar but with a further small red stripe in the middle.

Order Of The German Eagle 2nd Class - With Swords

Order Of The German Eagle 2nd Class - Without Swords