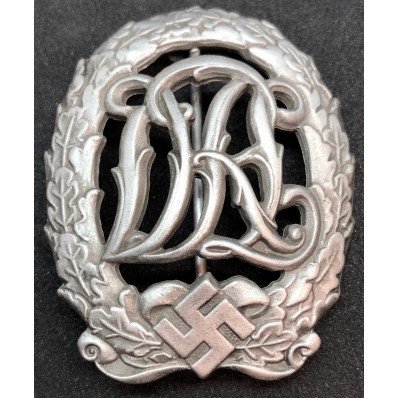 The National Socialist League of the Reich for Physical Exercise (German: Nationalsozialistischer Reichsbund für Leibesübungen, abbreviated NSRL), was the umbrella organization for sports and physical education in Nazi Germany.

The 1916 Summer Olympics had been awarded to Berlin, but were canceled because of the duration of World War I. The Deutscher Reichsausschuss für Olympische Spiele (DRA or DRAfOS) "German Imperial Commission for Olympic Games", was the German Olympic Sports organization at that time. In 1917 the "German Imperial Commission for Olympic Games" was renamed Deutscher Reichsausschuss für Leibesübungen (DRA), (sometimes also DRL or, more rarely, DRAfL) ("German Imperial Commission for Physical Exercise"). The name change reflected Germany's protest against the fact that Germany and other Central Powers were being excluded from the "Olympic family" which was dominated by the Entente Powers.
The Deutscher Reichsausschuss für Leibesübungen was led by Theodor Lewald and Carl Diem was its Secretary General. Even though it saw itself as the pan-German umbrella organization for sports, the fact is that it did not represent all types of sports and sports associations of Germany. A great number of sport clubs, especially those stemming from industrial workers' background, had not joined the DRA.

Berlin, gate of the Olympic Stadium

DRL membership booklet cover. The German eagle became the emblem of the DRL after the 1936 Olympic Games.

The Gaue of Greater Germany. As the Third Reich Expanded, the annexed territories of Austria and parts of Czechoslovakia came under the sphere of the NSRL

War propaganda: "Germany wins on all fronts." War-related triumphalism spelt doom for the once mighty NSRL

Many of the modern improvements of sports events by the DRL/NSRL are still in use. Carl Diem's idea: The Olympic fire in Berlin
After the Enabling Act, which legally gave Hitler dictatorial control of Germany in March 1933, all sports organizations connected to the Social Democratic Party, the Communist Party, and even to the church, were banned. This ban affected especially the sports clubs of industrial workers, most of which were called to split up on their own (Selbstauflösung) before the first semester of 1933 was over. The more conservative nationalistic and bourgeois clubs were allowed to subsist into the following year.
On April 12, 1933 Theodor Lewald gave in to the Nazi authorities and resigned as leader of the German Sports Office after it was revealed his paternal grandmother was Jewish.[2] The Nazi minister of the interior, Wilhelm Frick, interfered with the process of the election of a new Sports leader, and the decision was made by a hurriedly instituted three-man commission. Thus, in April 1933, Hans von Tschammer und Osten, a figure formerly unknown in German sports, was named Reichskommissar für Turnen und Sport (Commissioner for Gymnastics and Sports of the Reich). Von Tschammer, however, would keep his predecessor in a high position in the sports body, and years later he would appoint Theodor Lewald as president of the Organizing Committee of the Berlin Olympic Games.
Hans von Tschammer und Osten was a SA group leader and promoter of Nazism. In the name of gleichschaltung he disbanded the Deutscher Reichsausschuss für Leibesübungen on May 5, 1933 (officially on May 10). Von Tschammer was then elevated to Reichssportführer on July 19 and the whole sports sphere in Germany was placed under his power.

Badge for Judges of the Berlin Olympics 1936 (Yellow)

Badge for Judges of the Berlin Olympics 1936 (Black)

Badge for Judges of the Berlin Olympics 1936 (White)

Badge for Judges of the Berlin Olympics 1936 (Green)

Badge for Judges of the Berlin Olympics 1936 (Blue)

Badge for Judges of the Berlin Olympics 1936 (Red)

Honor Badge for Judges of the Berlin Olympics 1936