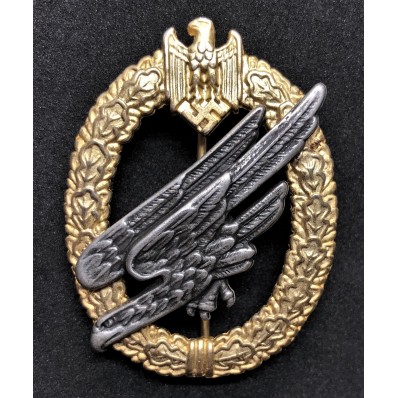 Fallschirmjäger (German: [ˈfalʃɪʁmˌjɛːɡə]) is the German word for paratroopers. They played an important role during World War II, when, together with the Gebirgsjäger they were perceived as the elite infantry units of the German military. After World War II, they were reconstituted as parts of postwar armed forces of both West and East Germany, mainly as special ops troops.

In the 1930s Hermann Göring, after having observed Soviet airborne infantry maneuvers, became committed to the creation of Germany's airborne infantry. He ordered the formation of a specialist police unit in 1933, devoted to protecting Nazi party officials. The unit carried out conventional police duties for the next two years, but in 1935, Göring transformed it into Germany's first dedicated airborne regiment. The unit was incorporated into the newly formed Luftwaffe later that year and training commenced. Göring also ordered that a group of volunteers be drawn for parachute training. These volunteers would form a cadre for a future Fallschirmtruppe ("parachute troops"). In January 1936, 600 men and officers formed a Jäger and an engineer company. Germany's parachute arm was officially inaugurated in 1936 with a call for recruits for a parachute training school. The school was open to Luftwaffe personnel, who were required to successfully complete six jumps in order to receive the Luftwaffe parachutist's badge.
During World War II, the German Air Force (Luftwaffe) raised a variety of airborne light infantry (Fallschirmjäger) units. The Luftwaffe built up a division-sized unit of three Fallschirmjäger regiments plus supporting arms and air assets, known as the 7th Flieger Division. Throughout World War II, the Fallschirmjäger overall commander was Kurt Student.
Fallschirmjäger participated in the occupation of Norway and Denmark and in the battles of Belgium, the Netherlands and France in 1940. They also took part in the Balkans Campaign, Battle of Crete, Italian Campaign, and on both the Eastern Front and later the Western Front would follow.